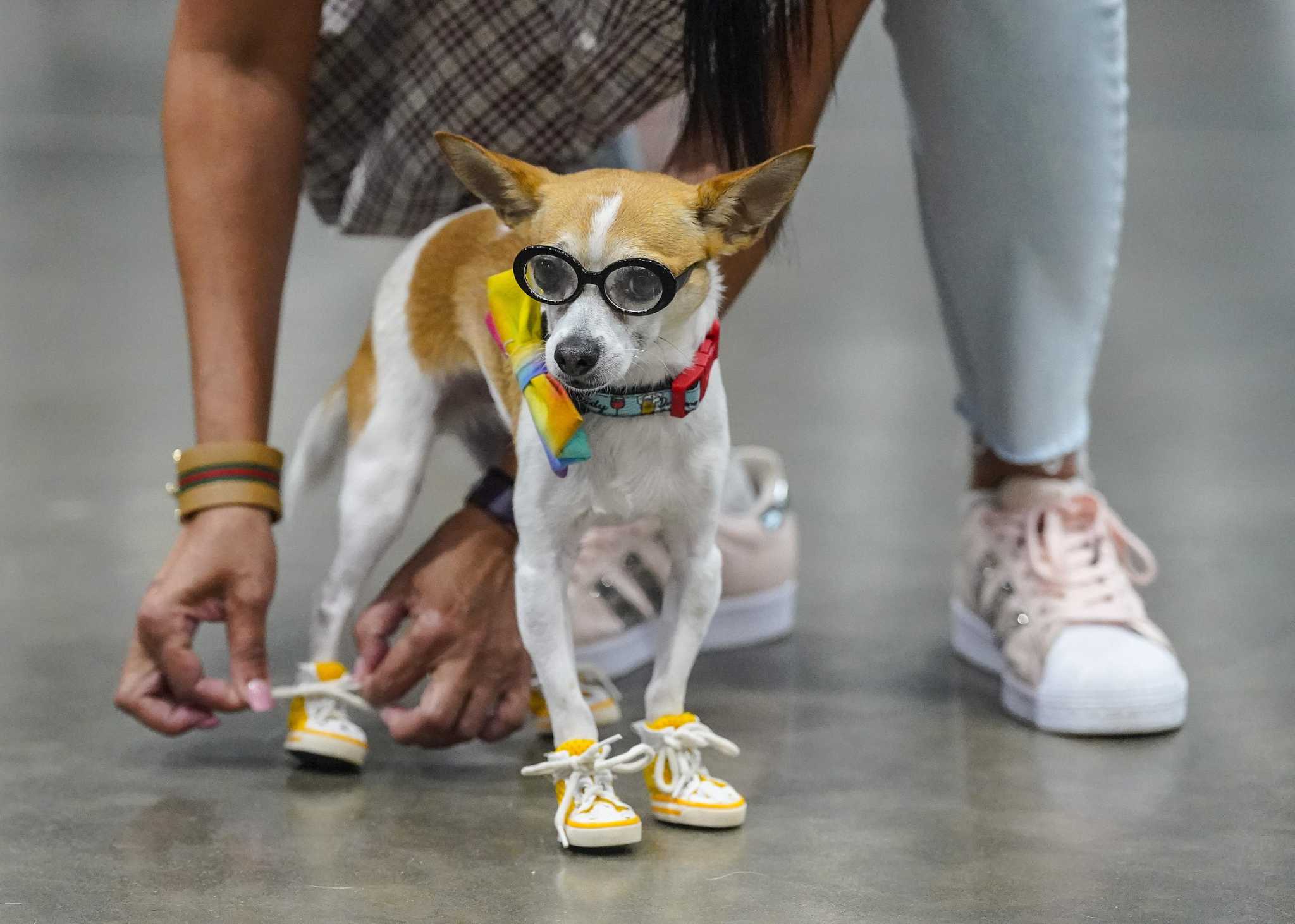 Lucy waited patiently for her trainer Kortney Vincent to give her a handful of treats. The 7-month-old English pointer was about to enter the ring at his very first dog show in Houston – only the second of his life – but there were no signs of nervousness. She was super relaxed.

“At home we call her loosey-goosey because she’s funny,” said Vincent, who traveled to Houston from his home in Arkansas. “She’s just entertainment and we’re just here for the experience.”

But at Saturday’s conformation show, Lucy was competing against other dogs as part of the 44th annual Houston World Series of Dog Shows. The event, which runs through Sunday at the NRG Center, is expected to draw more than 40,000 people, organizers said. Around 14,000 dogs were expected to compete.

A central part of the show was the conformation contest, in which dogs like Lucy are judged based on their breed standard, organizers said. Other events included flyball, frisbee and canine musical freestyle. At one event, dogs sniff carefully guarded rats hidden in haystacks and winners win a special “Find the Rat” ribbon. Some events were open to family dogs of all bloodlines, organizers said.

Most of the major shelters and rescue groups were in attendance, along with dog groomers and other people who care for and love dogs.

The show’s goal was to educate the public about responsible dog ownership through seminars.

Houston dog groomer Alyson Coleman arrived shortly before 9 a.m. with Winston, a one-year-old Australian Shepherd and German Shepherd mix. She was hoping to support a friend, a professional dog trainer, who will compete with her dog, Pulse. Pulse, who is an Australian Shepherd, competed for first place in the barn hunt competition, she said.

Coleman last attended the Houston World Series of Dogs in 2018 to learn more about dog grooming. She is back this year to meet and share her experiences with other groomers.

“I see a lot of groomers coming in and learning from other groomers,” she said. “And then a lot of people just come in to look at the dogs and the different breeds.”

Moments before entering the ring to judge on Saturday, Lucy munched on chicken while her coaches checked on the competition.

“These people over there – they have really good dogs and this will be our competition, we definitely have competition,” said Hunter Harris, Vincent’s fiancé, who supplements Lucy’s training with vigorous exercise.

Lucy was more than ready to perform when she entered the ring. His gait was steady, his head held high. She stood still, her feet perfectly and evenly apart, as the judge examined her head, her ears, looked at her teeth and lips, and touched her legs, back, and tail.

“The judges will pick something, like the feet in particular,” Harris said. “Make sure the feet are in exactly the right place, where they are really tight. Or the tail, make sure the tail is not too high. It’s actually set low. They will tell you exactly what the standard is if they have a height restriction. These judges are extremely competent.

Lucy is no stranger to competition. At her very first show, which took place in Oklahoma City earlier this month, she won the “Best in Sweepstakes” award. She now weighs around 30 pounds and is expected to double her weight as an adult, her trainers said.

On Saturday, Lucy came in second, according to her coaches. Since she is one of the youngest dogs in competition and has had good early performances, her trainers have high hopes for future competitions.

“We’ll be back tomorrow for more,” Harris said.

The show continues from 8 a.m. to 6 p.m. on Sunday. Adult tickets are $15. Seniors over 55 and active/retired military with ID receive a $5 discount. Free for children 12 and under with the purchase of an adult ticket. Parking is $20 per day, cash only.

The event was sponsored by local kennel clubs, including the Houston Kennel Club. The main sponsor was Purina Dog Food.