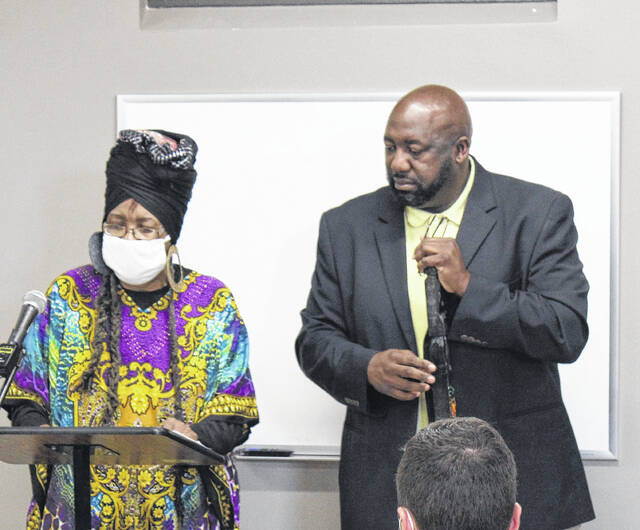 NEBWERRY – The ninth annual Dufford Diversity Week (October 25-November 1) at Newberry College was marked with the grand opening of a room at the Center for Teacher Education (CTE) on Friday, October 29.

Room 127 will now be known as the Nancy Lou Anderson-Glasgow Classroom.

Anderson-Glasgow was the first African American student to enroll at Newberry College in the fall of 1966 and the first to graduate with the Class of 1970.

Lemont Glasgow gave an introductory speech for his mother.

â€œBefore presenting the introduction, I just want to thank the Dufford Diversity Committee for this work. This is something I have dreamed of for a long time. Glasgow said. â€œI think Peggy (Winder) and I talked about this years ago, and it’s finally coming to fruition. I’m really glad she can see it. Too often these honors are bestowed on people after they have left. As they say in the church, it is good to give flowers while you are still alive.

After graduating from Newberry College, Anderson-Glasgow had a teaching career in various locations, including many years at Speers Street Elementary, now the Center for Teacher Education, according to Glasgow. He also mentioned that his goal was always to make sure the children were educated and that education was available. Anderson-Glasgow has also been active in community organizations, including the NAACP.

While holding back tears of gratitude, Anderson-Glasgow expressed gratitude to Newberry College and the Dufford Committee.

â€œI want to say thank you to all of you. I am really, really happy, â€said Anderson-Glasgow. â€œThat this class is named after me, and the great thing is that I taught in this school. The circle is therefore complete. “

The inauguration was attended by several staff, faculty, students and community members who were able to share their appreciation for the path Anderson-Glasgow has helped open for them.

In her remarks, Peggy Winder, Ph.D., Director of Diversity Education and Professor of Physical Education at Newberry College said, â€œRecognizing and honoring a pioneer and pioneer who paved the way and created so many opportunities for this little black girl from Lancaster, South Carolina. I was able to do all I have because I have stood on the shoulders of people like you. Thank you Mrs. Nancy Lou Anderson.

â€œAs a company, we say a lot about ourselves by who we honor and what we honor. For too many years in this nation we have honored mostly people like me. said College Archivist Tracy Power, Ph.D. â€œWe have to do better. We couldn’t do, as Newberry College, as South Carolina, as citizens of the United States, we couldn’t do better than to have this long overdue recognition for Ms Glasgow and I am thrilled to be part of it.

Pamela Roberson, Newberry College African-American Alumni Association, added to Anderson-Glasgow: â€œWe stand on your shoulders. You paved the way for people like me to graduate. I graduated in 1985 from Newberry College.

The Dufford Diversity and Inclusion Week series began in 2013 with the vision and generosity of William E. Dufford, who continues to sponsor the program. The retired educator made history in 1969 as the school administrator responsible for integrating the Sumter County school system, and he has always been an advocate for civil rights and education. The 2021 program was complemented by a growth grant from South Carolina Humanities through the National Endowment for the Humanities (NEH) under the American Rescue Plan Act of 2021 and the NEH Sustaining the Humanities through the American Rescue Plan (SHARP ) initiative.