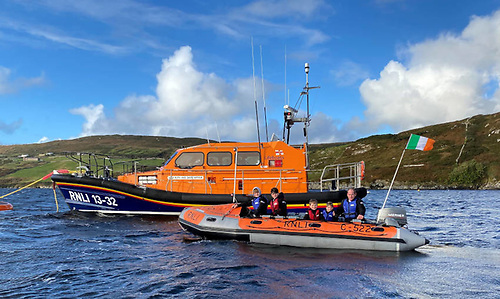 A father’s passion for the old Clifden RNLI lifeboat he served on was passed on to the next generation, as his son bought the first lifeboat his father piloted in 1996.

James Mullen, a coxswain at Clifden RNLI in County Galway with over 27 years of volunteer service saving lives at sea on the west coast of Ireland, is also the proud father of four boys who inherited the remarkable passion of their father for the sea, the RNLI and everything to do with boats.

It was this passion that inspired James’ son Ronan, 14, to locate and purchase the Class C 522 inshore lifeboat that was stationed in Clifden between 1989 and 1997.

The boat holds so many memories for James as a teenage RNLI recruit and when his sons asked him the history of the station and his favorite lifeboat, the stories he told them always came back to the C-class.

Recalling his early years as a crew, James said: “I loved the sea, I had lived next to it all my life and [then] finally, at 17 and with the consent of my parents, I was a lifeboat crew.

“We had a lot of calls on the C class and it was an amazing boat; she was tough on the back but she never failed to bring us home. This profession was the best money you could buy and I was so impressed with it.

“I remember a call one winter night in 1995, we were going to rescue a boat in difficulty at sea. The weather was terrible with westerly winds of force 7-8. It was up to us and our trusty Class C inshore lifeboat to get everyone home safely.

“As the seas got rougher the Class C sank deeper and when we were all safely back ashore I remember thinking what an amazing boat she was to stand up against those huge waves. “

Clifden lifeboat crew at the old Class D station in 1995 when James was 18 | Credit: RNLI / Clifden

James’s beloved C-Class was taken out of service and left Clifden in 1997, but little was known about his fate after that. So young Ronan, inspired by his father’s stories, launched an Internet search to find her.

Through various searches and online forums, Ronan established that the lifeboat had gone from Clifden to Ballyglas RNLI in Co. Mayo for a short time, from there to the RNLI Museum in Poole and eventually to a private owner in the UK. United. Ronan located and formed a friendship with the owner, who was another RNLI crew member based in Weston-Super-Mare.

Eventually a deal was made Ronan bought his father’s favorite old lifeboat and the family brought it back to Clifden to the delight of the entire Mullen Clan, the Clifden RNLI crew and the many. locals who remember his dedicated service.

Ronan describes the moment he found a photo of the lifeboat online: “I was so shocked I had been searching online for ages and when I finally came across a photo of the C-Class I told daddy, is that she? And he said, it sure is. After that I knew we had to have this boat. I love the boat, I love being on the water and as soon as I get old enough I will join the RNLI.

James added, “Our station has grown a lot over the years thanks to the dedication of our volunteer crew, we are now using an Atlantic 85 inshore lifeboat, Shannon class all season lifeboat and are awaiting delivery of a very special boat next spring.

“Our new Shannon-class ALB is under construction and when it comes to Clifden it will be named after 10,000 loved ones launching a remembrance campaign.

“It’s a wonderful thing to see the next generation of lifeboat enthusiasts coming in, when I look at my four boys now, I think, was I like they are now 27 years ago? Their whole life ahead of them and a future filled with love for the sea and the RNLI.