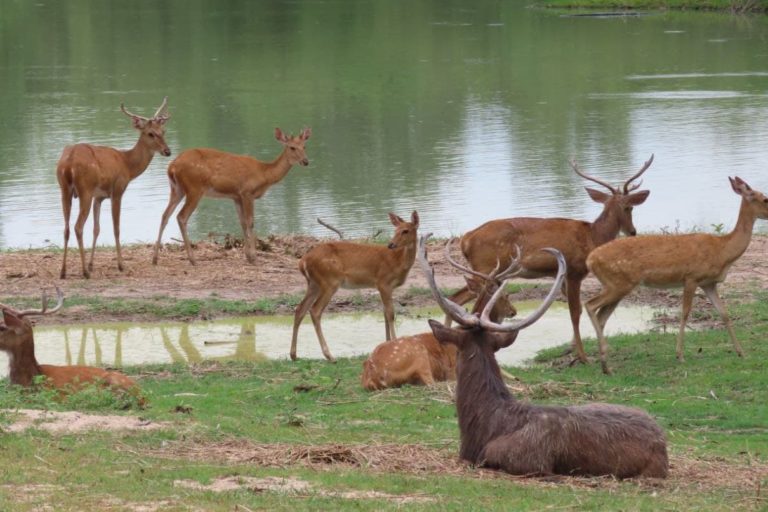 For more than 20 years the Phnom Tamao Wildlife Rescue Center (PTWRC), managed by the Cambodian forestry administration and supported by international NGOs Wildlife Alliance and free the bears (covered by Sentinel of Asia in 2018) was the only place in Cambodia that will house all wildlife species confiscated from poachers and the illegal wildlife trade.

At the PTWRC, wild animals are cared for and rehabilitated and, where appropriate, returned to the wild once their injuries have healed. It is a place where an elephant that has lost a leg due to a trap walks on a prosthetic limb, and where Eld’s deer, sambar, muntjac, otter, binturong, are born in captivity. gibbons and hornbills. regularly released in the forests surrounding the rescue center itself, or in the forests of the world famous Angkor Wat temples, and also in the gargantuan landscape of the Cardamom Mountain rainforest.

And yet a recent report ominously recounts that the release site – the 2,300 hectares of forest directly surrounding the current rescue center – is in danger of being cleared as part of a land transfer programme.

Details of exactly what will replace this 2,300-hectare forest, teeming with birds, sambar deer and an array of other species, just an hour from the capital Phnom Penh, are unclear. But Wildlife Alliance director Nick Marx, understanding that development is inevitable in modern Cambodia – especially in an area so close to the city – suggested an alternative view of development that does not involve condominiums, parking lots and planned skyscrapers.

“We would encourage development if it was done in an ecological way,” he explained. “The creation of a safari-style eco-resort with professionally run lodges, lakes, night and day game drives, birding shelters, jungle tours, all led by guides professional and well-trained, would be a great benefit for Cambodian citizens and foreigners visiting and a tribute to the Cambodian government.

Sambar deer, a species whose status was recently alarmingly changed by the IUCN to Vulnerable, have recently been photographed in impressive numbers by remote camera traps in this threatened forest, and everything from painted storks to primates in passing by the pythons, calls this area wilderness. an unprotected oasis surrounded by a country whose economy has grown by leaps and bounds, with expanding development now encroaching on the last wild places.

And yet, this relatively unknown piece of forest is worth saving both for its wildlife and for the Cambodian people, as Marx explains: “Indeed, we see this as a benefit for the environment and for conservation in Cambodia. This would benefit Cambodian citizens, especially those in Phnom Penh who have no other natural place to visit for very many miles and also foreign visitors. It would be a lasting legacy for the forest administration, for the Cambodian government and for the Prime Minister, demonstrating Cambodia’s desire to sustainably conserve its wildlife and natural resources, and it would be an example that will endure for future generations. This form of eco-development would not only bring credit to the current government, but would also generate sustainable income, perhaps not the large immediate sums that deforestation of the land will yield, but sustainable income over a longer period.

The choice of site for the rescue center in Phnom Tamao (“phnom” means “mountain” in Khmer) was excellent, as rescued wildlife immediately feel at home in this habitat, even species from the eastern Mekong, such as the endangered douc langurs – who are brought in for care and rehabilitation. Some species manage to escape from their rehabilitation facilities and live happily in the surrounding 2,300 hectares of healthy forest which is now under imminent threat of clearing – a testament to the great foresight that went into choosing Phnom Tamao as the location for the rescue center.

Having visited the PTWRC several times myself, I have always felt mesmerized by the myriad ubiquitous calls of the gibbons (pilled and yellow-cheeked, and many other endemics) over the occasional lazy whine of a tiger and the drifting smell and cry of elephants. The PTWRC is much more than a ‘zoo’ – something Cambodia already needs and has in the PTWRC, of ​​the highest standard – it is also a place where rescued wildlife has a second chance to return. in nature. It’s a place that neighboring countries like Laos, Vietnam and Thailand have nothing to compare to, and it’s all thanks to the foresight of the Cambodian government, Wildlife Alliance and Free the Bears.

If the 2,300 hectares of natural forest surrounding the PTWRC are cleared to make way for plantations or commercial complexes or whatever the developers have in mind, a vital and increasingly scarce slice of forest habitat that offers a lifeline to rare animals that have been lucky enough to escape the jaws of the wildlife trade will forever evaporate, and the Cambodian people and natural heritage will forever be terribly depleted.

It doesn’t have to happen. The forest is still standing. The Cambodian government has been wise in the past. Let it shine again now.

Gregory McCann is an assistant professor at Chang Gung University in Taiwan.