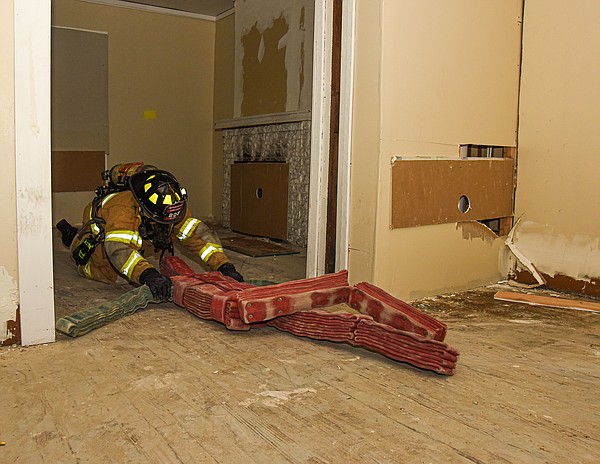 Imagine having to carry around 75 pounds of extra weight and the temperature outside is 90 degrees or more.

This week, City of Jefferson Fire Department personnel practiced rescuing victims of a burning house. Captain Ryan Carrender said they were grateful to be able to use a house the city had acquired in the 400 block of Lafayette Street.

“We’re focusing on the basics because we have several new players, and it’s good for the veterans to keep up to date with the right techniques,” Carrender said.

During a drill, a small group of firefighters entered the house and pulled out two training dummies. Doing drills like this allows crews to acclimate to the heat they would face, Carrender added.

Firefighters move in and out of the rotating structure. They go to a place designated on the site as a recovery center.

Temperatures during a structural fire can reach up to 1,200 degrees at the ceiling and 200 to 300 degrees at floor level.

“With our cargo gear and air packs, and depending on how much extra gear we need to bring with us, our excess weight could increase by up to a few hundred pounds,” Carrender said. “We could carry equipment, such as a thermal camera or tools to force open a door, while being on the lookout for potential victims.”

If it was a large structure fire, Carrender said, they would call in more staff and that would help turn more staff around.

“We need to give them time to cool down on a hot day to avoid heat exhaustion,” Carreder said.

While there may be times when it looks like fire crews aren’t responding to many calls for service, Carrender said, people shouldn’t think they’re not busy.

“There are a lot of things that go into our days like this training and the maintenance and cleaning of equipment,” Carrender said. “We are always busy with something.”


Juie Smith/News Tribune. During Monday’s practice, Jefferson City firefighter Mason Smith carries a casualty headfirst down the steps to rescue them in the safest and fastest way possible. Firefighters took part in ongoing training on Monday to try to acclimate to the sweltering heat that is expected to hover over the region for the next week or so.

Jule Smith/News Tribune. Timothy Bullard, right, and Michael Bainbridge, second right, step outside to refresh and rehydrate after leading a practice run at a vacant house. As part of ongoing training, members of the Jefferson City Fire Department participated in a search and rescue scenario on Monday.