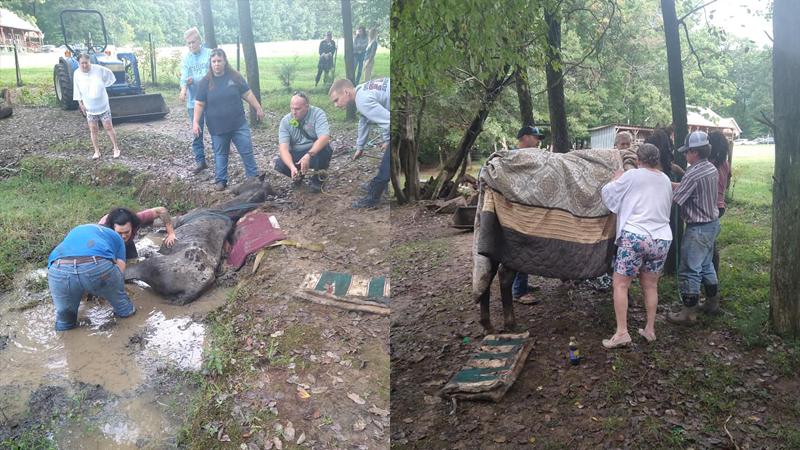 RANDOLPH COUNTY, NC – A horse is recovering after fire crews had to free it from the mud in Randolph County.

Guild-Rand Fire Department Engine 411, Car 20, Rescue 20, Ash-Rand Rescue and Randolph Animal Control all responded to a report of a horse stuck in a pond in the Cedar Square area on Saturday.

At the scene, crews saw the horse on its side in a particularly muddy corner of the pond. The horse’s owners and neighborhood friends were also at the scene.

The fire department said the horse had no energy to help with the rescue effort, so the team had to use straps, pulleys and ropes to gain a “mechanical advantage,” he said. declared the fire department.

The team managed to get the horse to safety, and once the horse was out, its owner covered it with a blanket to warm it up.

After resting, the horse was able to get up. She was taken to a stall where she could rest safely and regain her strength.

The crews tasked with saving this horse received a wave of praise from the community.

Brandy Longmire, a neighbor, said she was at the scene as the team worked to save the horse.

“Time and time again, our little neighborhood comes together whenever there is an emergency,” Longmire said. “Here, we never lack help. We thank our firefighters and rescue teams for the hard work they do! It was like watching it on TV but it was 30 feet away.

Justin and Tori McLeod of Biscue-based 4Hooves Large Animal Services said, “Thank you for going above and beyond and answering animal rescue service calls. Congratulations on a successful rescue operation! Prayers for the recovery of the horse. ‘