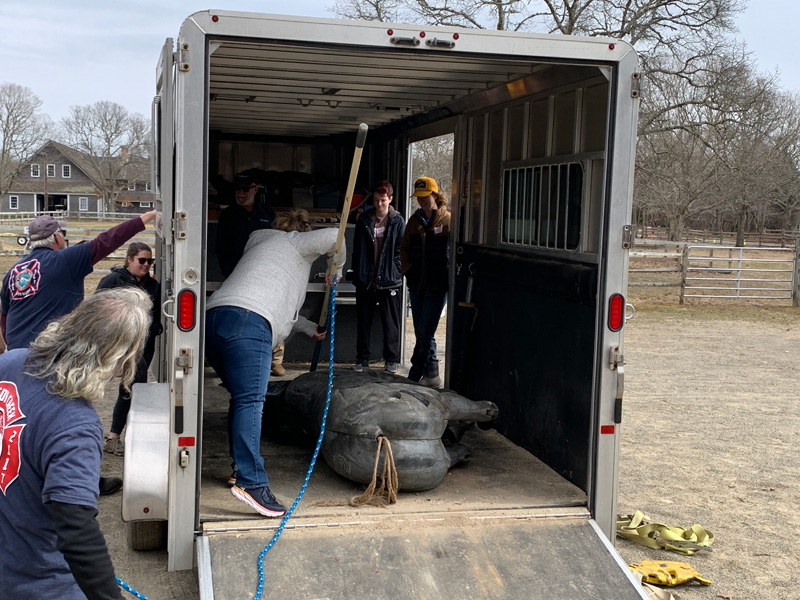 West Tisbury horse riders and firefighters from the city’s rescue team were among those who gathered at Martha’s Vineyard Agricultural Hall on Saturday for large animal rescue training sessions.

Roger Lauze, a semi-retired Massachusetts Society for the Prevention of Cruelty to Animals (MSPCA) Equine Rescue and Training Officer and volunteer Steph Cormier led the training. Among other training exercises, Lauze and Cormier used a horse rescue dummy, named Lucky, and a giant sled called a rescue glider to help trainees learn how to safely move a large, injured animal like a horse to a trailer or an animal ambulance. . Lauze said the MSPCA developed the rescue glider in 1994. He described it as a flat piece of plastic with a curved arc. Using special techniques, rescuers are able to tip a downed horse and slide the rescue pad underneath.

Lauze said the rescue glider, which is made by different manufacturers, is not expensive equipment compared to many other types of rescue equipment. He said they ranged from $1,700 to $3,000 each. Compared to Lucky, the Rescue Glider looks cheap. Rescue Critters, the maker of the 800-pound Lucky, priced the equine dummy at $14,899, according to a company webpage. Horse enthusiast Jessica Burnham, Martha’s Vineyard Horse Council, Flanders Real Estate and Martha’s Vineyard Agricultural Society were among the training sponsors.

Burnham told The Times she was working to acquire “at least one” rescue glider for the Vineyard.

Burnham said the training went well and feedback, particularly from firefighters, was positive.

West Tisbury Fire Lt. Brynn Schaffner, who attended the training, said it was productive. “We’ve had several horse rescues over the years,” he said.

He also said he attended not as a member of the fire department, but as the director of the Dukes County Technical Rescue Team.

Who is Rebecca Koltun? George to the Rescue episode 2 owner was paralyzed in the neck at 21