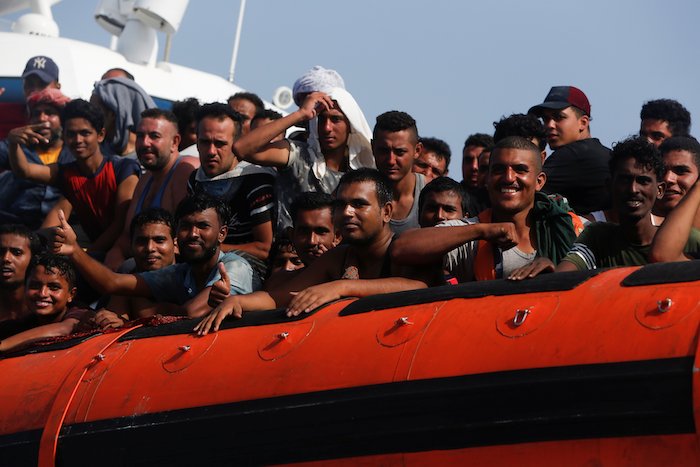 Hundreds of migrants are in limbo on Mediterranean rescue boats

VATICAN CITY (CNS) – Two lifeboats carrying 800 migrants rescued from sinking or overcrowded ships have been forced to navigate international waters of the Mediterranean for more than four days, awaiting permission to dock in a safe port.

After an already exhausting and traumatic journey from North Africa on dangerous ships organized by traffickers, the rescued migrants were stranded on boats operated by non-governmental aid organizations, who reported that food and patience were at hand. short.

“With this heat, with the limited space on the deck of the boat, the situation can only get worse” as the days go by, said Luisa Albera, who was aboard the Ocean Viking. The boat was carrying more than 550 people rescued from six different ships trying to cross the Strait of Sicily.

“A ship can only be a solution of transition between a situation of danger and a place of safety on land. Keeping people who escaped death at sea waiting for days before they can be brought back ashore is putting their physical and mental health in danger, ”she told ANSA, the service of Italian press, August 5.

Another rescue vessel, the Sea-Watch 3, operated by a German NGO, had on board more than 250 people from five separate rescue missions; he was faced with the same situation of not receiving any response to requests for assistance in finding a safe port and the rapid disembarkation of survivors. A handful of people on the two ships in need of emergency medical treatment were evacuated by Italian and Maltese authorities, according to reports on August 5.

SOS Méditerranée, the French humanitarian organization that operates the Ocean Viking, has been calling on the government maritime authorities since August 1 to “assign a place of safety without further delay and to the Member States of the European Union to reactivate a disembarkation mechanism and relocation that supports coastal nations in coordinating arrivals, ”according to ANSA.

In an interview with Vatican News on August 4, Archbishop Corrado Lorefice of Palermo said that any time government officials refuse to help or do not make urgent decisions regarding the rescue operations, it demonstrates that the refusal to ‘assistance’ is now officially part of the strategy of our government leaders. have adopted to manage migration.

This inaction allows the continuation of a “heartbreaking genocide, which many still refuse to help (prevent), turning their heads the other way,” he said.

“First of all as human beings, but above all as Christians, we can only observe the impossibility of remaining silent in the face of this persistent evil, we can only remember how urgent it is to act against everything that is happening around and in the heart of the Mediterranean, in the name of human rights, the Italian Constitution and the Gospel ”, declared the Archbishop.

Jesuit Father Camillo Ripamonti, president of Centro Astalli, a center of the Jesuit Refugee Service that assists refugees in Rome, said that “saving those whose lives are in danger at sea, while other legal means to enter Europe are lacking, is a binding humanitarian duty “.

Italy’s Interior Ministry reported that nearly 30,000 migrants entered the country by sea from January 1 to the end of July.

It is a number which only sets off alarm bells and cries of “invasion” from people “who use fear and demagoguery as their only tools to be used in political and media debates”, did he declare.

National and local authorities and residents can work together “to end the slaughter of men, women and children seeking safety by welcoming migrants across the country” and spreading to where they are hosted, said the priest.

Meanwhile, a reception center on the tiny island of Lampedusa was at breaking point with a string of new arrivals in recent weeks, holding 1,200 people while its maximum capacity was 250, according to Vatican News.

More than 9,000 people had been recorded as arriving on the island by boat between July and early August, according to data from the Italian government.

Lost hikers rely on unpaid rescuers. Colorado could change that.