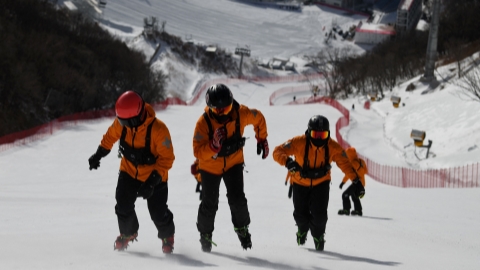 As one of the most spectacular yet challenging events of all Winter Olympic sports, accidents can easily happen in alpine skiing.

The highest hourly speed in alpine skiing can be 140 kilometers with a height difference of 900 meters. The proportion of injured athletes is almost 15%. Some accidents are even life threatening.

Nina O’Brien, an American alpine ski racer, crashed and broke her left tibia and fibula at the end of her second run in the giant slalom event on February 7.

After undergoing successful surgery on February 8, she thanked medical staff on social media.

“I want to thank everyone who took care of me, especially those who rushed to me upon arrival and my doctors and nurses in Yanqing,” she wrote.

The Beijing 2022 Winter Olympics Alpine Skiing Medical Safety Team was established in 2018. It consists of more than 40 doctors who are experienced skiers.

The medical team began final preparation for the Olympics on January 4. The training lasts five days a week with four hours of skiing per day.

Guo Qi, assistant team doctor and trauma specialist at Jishuitan Hospital in Beijing, is one of the first ski doctors in China.

“Different from Chinese doctors, many emergency doctors in the United States or Europe start learning skiing in childhood,” Guo said.

The biggest difficulty for ski doctors in China is to master skiing well.

According to the International Ski Federation (FIS), if an athlete is injured, doctors must arrive within four minutes with a medical kit weighing more than 10 kilograms.

“In fact, we may not be able to move immediately,” Guo said. “We have to wait for a safe opportunity, so the time is less than four minutes. It’s a big challenge even for ski enthusiasts.”

Bai Peng, an anesthetist at Peking University Third Hospital, added, “Medical rescue is our daily job, but it’s a totally different environment in the Alps.”

The third PKU hospital was involved in medical safety work in the 2008 Summer Olympics. The hospital’s ski association was established after Beijing successfully won the bid to host the Olympics in winter of 2022 in 2016.

“The slope is steep, which is much more difficult than advanced slopes at normal ski resorts,” Bai said. “Also, the International Ski Federation has a special standard for snow in alpine skiing events, so it’s best called ‘skating’, which makes it more difficult to perform medical rescues.

“But we know the track well having skied it countless times.”

Bai has a Level 2 certification from the Alliance of Canadian Ski Instructors and a ski instructor qualification in China.

“The fundamental and most difficult requirement for the ski doctors and the rescue team is to remain stable alongside the athletes,” he said.

“Another challenge is the freezing temperature with minus 10 to 20 degrees Celsius. We have to take off our gloves which prevents our fingers from working effectively.”

Olympic events have a particular level of snow.

According to the FIS, ski doctors must also be competent in rope rescue. The medical team is now skilled in knots, equipment and safety techniques in the vertical rope rescue environment.

“Many team members suffered during the four years of training and had to undergo surgery, but everyone knows that these are their responsibilities,” Guo said.

In addition to treating injuries as soon as possible, transporting injured athletes must be completed within 15 minutes.

There are ambulances and helicopters on call.

“Injured athletes will be transferred to the medical post for full evaluation and treatment,” Guo said. “The transport must also be fast in the event of an impact on competition.”

The air rescue team has 66 personnel on duty.

Lough Derg RNLI launched to investigate a report of a kayaker in difficulty.