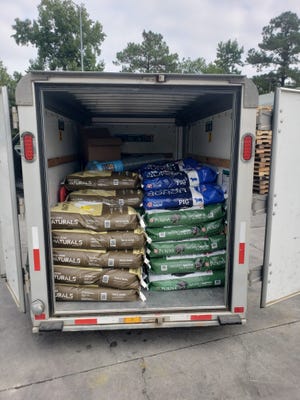 Miriam Gilligan, Founder of Mini Pig Rescue Pigs by the sea to Hubert, leads an effort to collect, transport and distribute pet and livestock supplies to the New Orleans suburb of Harvey. Hurricane Ida was a Category Four storm that made landfall in Louisiana on August 29.

“I had started getting messages from people in Louisiana desperately looking for thread,” said Gilligan. “I spent days trying to find someone closer who had food or who could help me, and after a few days I finally realized that there was no one else around, and if it had to be done, I had to do it. . ”

The JPR Pet Food Pantry in Jacksonville is also contributing to the effort, which donated cat and dog food to the cause and helped raise money and support from other companies for the trip on the route, which begins on Sunday.

The effort has already racked up nearly an entire U-Haul trailer full of donated items that include animal feed, bedding, and much-needed medical supplies like vaccines and antibiotics.

“Some of the biggest issues they’re having right now is that some of the small injuries turn into life-threatening infections,” said Gilligan.

Gilligan and another local volunteer are expected to travel to Christ Our Savior Lutheran Church in Harvey to provide community members with donated animal supplies starting Monday. Gilligan said they would accept donations in person at Piggies by the Sea, located at 101 Englewood Drive in Hubert, until Saturday night. Tax deductible donations can also be made through PayPal at paypal.me/piggiesbythesea till Tuesday.

Having experienced the evacuation of his own rescue for Hurricane Florence in 2018, and relying on the goodwill of another person to provide enough food for the rescue, Gilligan hopes this trip will highlight the largely unseen struggle to which pet owners face after a hurricane.

“It’s one of the emotional parts of hurricanes and natural disasters that I don’t think get enough recognition,” said Gilligan. “For some people, these animals are their only family, and not being able to feed (or) save them is more devastating than losing their home.”

To learn more about the humanitarian effort, visit Piggies by the Sea Facebook page or contact Gilligan at (910) 376-0791 or [email protected]

Journalist Calvin Shomaker can be contacted at [email protected]