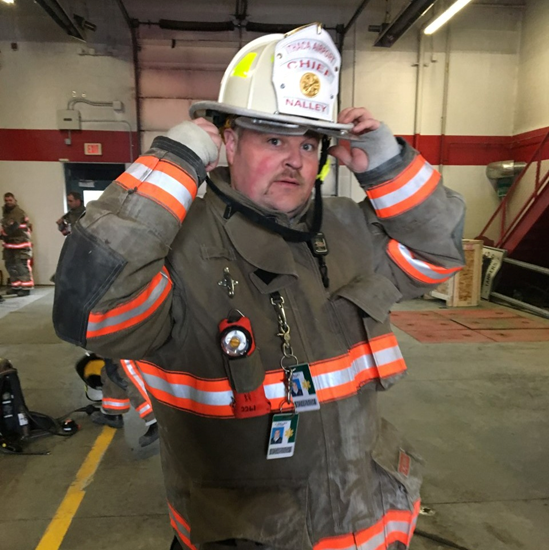 ITHACA, NY (WETM) – Each week, WETM recognizes the first responders in our region who work hard every day to keep us safe and healthy. This week we would like to thank a man who has served his community since he was a teenager.

Josh Nalley is the fire chief for Ithaca Airport Crash Fire Rescue at Ithaca Tompkins International Airport. Josh has been a firefighter since he was sixteen. He grew up in a fire station where both his parents and his older brother were all volunteer firefighters.

He did not envision being where he is today when he started his career in the fire service, however, although he works hard and learns as much as he can every day, he leads now the Aircraft Rescue Firefighting (ARFF) division of Tompkins International Airport in Ithaca, NY.

Josh is married, has an adopted child, and is close to his family, including his parents and brother who also live in the area. When they’re not protecting travelers entering and leaving the airport every day. He also serves the community with the Lansing Fire Department.

Thank you for your service and dedication to our community!

If you know a hero (First Responder) that you would like to see recognized, you can name them on the link below.

Every Tuesday during 18 News at 5:30 p.m., we’ll highlight first responders among viewer submissions. You can nominate a first responder by clicking on this link.

The Park Avenue plan will be reintroduced | News, Sports, Jobs