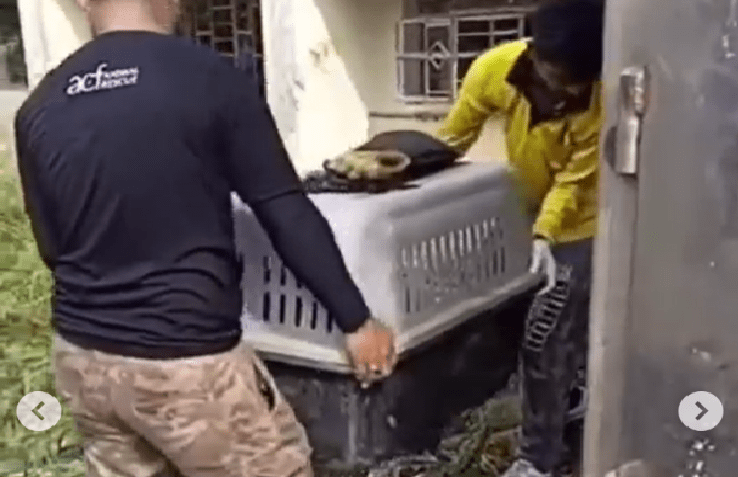 The Ayesha Chundrigardh Foundation (ACF) took to Instagram to shed some light on the difficulty of carrying out animal rescues during the monsoon season.

ACF is the first and largest animal rescue organization in Pakistan, which has contributed immensely to the welfare of animals across the country.

However, recently the organization admitted that they are not doing so well due to the strains created by the rain in Karachi.

The NGO posted videos of their cars driving through flooded streets and soaked workers lifting a paralyzed dog, which appeared to have been run over by a car.

The organization stressed that this was a time when the animals needed their help the most. However, poor rainwater management increased fuel costs and made it difficult for them to reach critical locations in time.

The NGO further complained that people were not paying their meager Rs 250 fee, which barely covered their fuel costs, let alone maintaining their heavy cars.

“When we asked for Rs 250 per rescue,” the message read, “this barely covers fuel and many don’t pay, so we just cover the costs and carry on anyway, as we do.”

The NGO also said it was not “responding” to people’s urgent calls because of the jerky phone signals created by the rain and because of the difficulty of getting from place to place in the flooded streets.

“The team is busy making sure we get to the scene and our car doesn’t get stuck loaded with injured animals,” the post read.

The NGO said it was difficult to juggle all the tasks required, as more time than usual was taken up by rescue missions during the rainy season.

“We must ensure that the over 750 (animals) who live with us are well,” the message read, “and that Empress Market traders take precautionary measures for the animals during the rain.”

The NGO is also concerned about the health of the sacrificial animals, which are in danger due to the rain.

After explaining all the hardships, the post urged the people of Karachi to donate to the organization during these turbulent times.