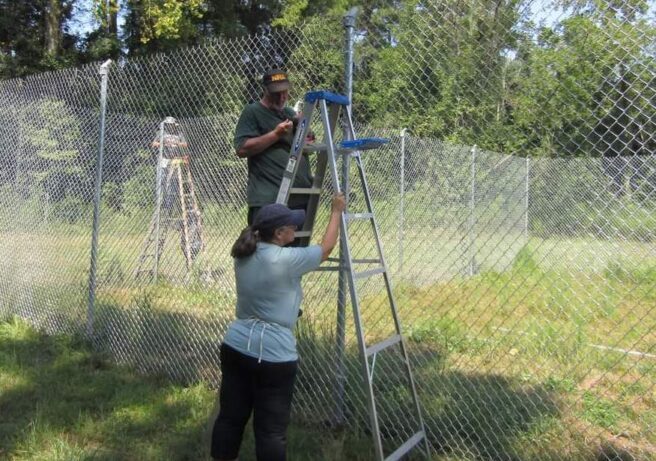 When you think of Fair Bluff, exotic animals aren’t usually the first thing that comes to your mind.

Shizzy’s Wildcat Rescue is a non-profit organization dedicated to helping animals kept in captivity and in the wild. They are building a refuge for animals rescued from private property, ranchers, circuses and other bad conditions.

Lions, tigers, snow leopards, cougars, ocelots, servals, bobcats, caracals, wolves, bears and other leading predators will be able to live the rest of their lives in comfortable and secure natural habitat. Some animals lived in such harsh conditions that they never even touched the grass or walked around other than in a cage. North Carolina is one of four states in the United States that do not have laws governing the keeping of exotic animals.

Shizzy’s was launched in 2013 in Greensboro by Shazir Haque. Saving animals has always been her life’s work and her life’s dream.

Haque was looking for a place to build a shrine, and Rhonda Billeaud (who is now the organization’s co-chair) and her daughter directed him to Gary Lanier. Lanier is the director of economic development for Columbus County.

Lanier found 56 acres of land at Fair Bluff next to wetlands with access to the Lumber River, and it mimicked the perfect natural environment for big cats who surprisingly have a great love of water. Wild cats may not swim in the river, but they will still be able to smell and hear the flow of the water.

It also gives the organization a chance to bring something positive to an area that has gone through difficult times.

Fair Bluff suffered catastrophic flooding from Hurricanes Matthew and Florence. Wildcat rescue is built with floodwaters in mind and taking action to keep animals safe and dry. The sanctuary is built with the latest technology, including mobile air-filled dams for many buildings, and all of the habitats are elevated above the flood line level.

Mobile cages have been purchased to evacuate small animals that do not take advantage of the water like big cats do.

“We are aware and ready for Mother Nature,” Billeaud said.

Shizzy’s Wildcat Rescue is currently receiving weekly calls about animals like wolves and wolf breeds, Billeaud said, so volunteers are desperately needed to build habitats. Seven structures need to be completed as soon as possible for the shrine to open. They are currently repatriating animals from as far away as the West Coast until they can be brought to North Carolina. Regular open volunteer days are held where people can raise and hang fences.

Covid has hit the organization hard, Billeaud said, so as many hands as possible will be a welcome sight for Shizzy’s.

Billeaud is convinced that the people of Columbus will support the refuge.

“Everyone has the power to make a difference. We want to inspire people to do good, ”she said.

All types of volunteers will be needed for different projects at the sanctuary, including landscapers, and even teens can volunteer for an educational program at all sites. Young people will have the opportunity to work on stands during festivals and to inform the general public about exotic animals.

Sponsors and donations are always welcome, but Shizzy’s Wildcat Rescue’s biggest request is for the community to contact you with any questions or concerns.

“We want people to understand that we are a sanctuary for animals and not a zoo for humans,” Billeaud said. “We are not associated with any zoo or any other organization. We hope the community loves the animals as much as we do.

To volunteer at Shizzy’s Wildcat Rescue, get more information, donate, or become a sponsor, contact Rhonda Billeaud at 910.840.1886 or email [email protected]