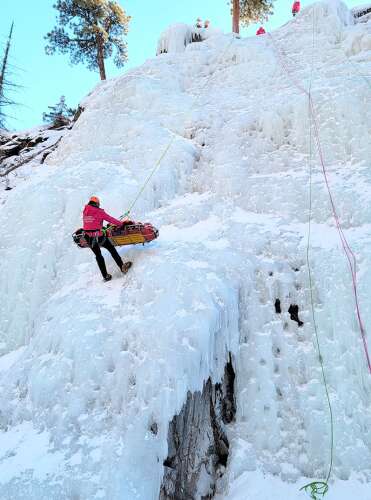 On Feb. 12, rescuers responded to a man who fell 20 feet from a cliff on Log Hill Mesa near Ridgway in Ouray County, said Tim Pasek, search and rescue volunteer and information officer. public.

The victim, who suffered a head injury and was semi-conscious, was loaded onto a litter and then hoisted up the cliff by a boom and winch attached to a rescue truck.

A man who fell from a cliff on Saturday near Ridgway has been rescued by the Ouray Mountain search and rescue team. (Courtesy picture)

An injured ice climber at Ouray Ice Park was excavated Jan. 29 from a waiting ambulance by the Ouray Mountain Rescue Team and the Ouray County Emergency Department. (Courtesy picture)

He was transported by ambulance to a meadow and then transported to hospital by a Care Flight of the Rockies helicopter. The man reportedly fell during a visit.

On January 29, the Ouray Mountain Rescue Team replied to an ice climber at Ouray Ice Park who was hit in the back by a falling block of ice in Uncompahgre Gorge.

People at the ice park had wrapped the woman in a sleeping bag and she was loaded onto a search and rescue stretcher, Pasek said. A rope and pulley system lifted her to the top of the canyon rim.

The woman was loaded onto the Ouray Mountain Rescue tracked all-terrain utility vehicle and transported down a county road to a waiting ambulance. Ouray County EMS also responded to the incident.

Each rescue was assisted by 10 to 12 trained volunteers, Pasek said.

Care Flight of the Rockies took a man to hospital who was injured in a fall on Log Hill Mesa near Ridgway on Saturday. (Courtesy of Ouray Mountain Rescue Team)

An ice climbing and waterfall rescue workshop with Rigging for Rescue is scheduled for February 21-25 at Ouray Ice Park.

The workshop focuses on the techniques and intricacies of ice climbing and waterfall ice rescue practices. Rigging for Rescue has been a commercial guide operator in the park since 2007 and trains park staff. To register, go to Rigging for Rescue website.