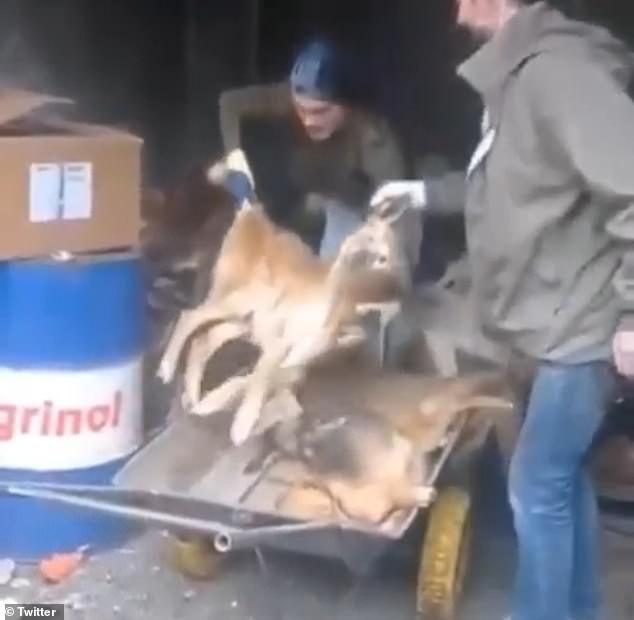 Hundreds of dogs have been found dead in an animal shelter in Ukraine after Russian occupiers left them to starve in their cages for weeks.

The UAnimals shelter in Borodyanka, just north of kyiv, said up to 485 dogs were locked in their cages by Russian forces shortly after the start of the invasion of Ukraine on February 24.

There they remained without food or water for about a month as the occupants left them to die, until personnel were able to return to the compound on April 1 once the Russian soldiers withdrew.

Footage posted by the animal shelter on Instagram showed workers piling up a huge pile of dead dogs that had wasted away in the presence of the occupants.

Meanwhile, footage of half-mutilated corpses in some of the cages suggested some dogs had started eating their dead cellmates in the complete absence of food.

“It’s the number of dogs… and that’s not all, it’s only a part,” a woman can be heard saying through tears as she films workers adding to the pile of corpses.

Only 150 of the 485 dogs were found alive when the workers returned, 27 of which were transferred to local veterinarians in critical condition.

UAnimals has since announced on social media that it will pay 50,000 hryvnia (nearly £1,300) to anyone willing to save some of the animals still alive, and hit out at the director of the Kyiv Veterinary Hospital – the owners of the shelter – for not arranging proper care or evacuation for dogs.

“It’s the number of dogs… and that’s not all, it’s only a part,” a woman can be heard saying through tears as she films workers adding to the pile of corpses

Up to 485 dogs were found locked in their cages by animal shelter workers, of which only 150 managed to survive

Many of the dogs had wasted away after weeks without food, and their corpses were little more than skin, fur, and bones.

A video, posted by Oleksandra Matviichuk, a lawyer and head of the nonprofit Ukrainian Center for Civil Liberties, showed dozens of carcasses littering the floor of the UAnimals shelter.

‘I have no words. The Russians even killed dozens of dogs in the kyiv region. WHY??’ she tweeted.

Some of the carcasses had remained intact, but others had been torn apart by the ravenous dogs still trying to survive.

Although shelter staff were unable to care for the animals while the city was under the control of the Russian occupiers, the UAnimals shelter announced on social media that it had filed a complaint with the police demanding that the deaths are investigated as crimes of animal cruelty.

He argued that the head of the kyiv Veterinary Hospital, Natalya Mazur, was responsible for organizing animal care at the start of the war, but left only one man for himself. take care of the whole population.

UAnimals said the man left the dogs to die “in agony” and demanded that Mazur be replaced as director of the kyiv Veterinary Hospital because “the current director cannot act as a director and cannot should not interact with animals in the future”.

Mazur, at the start of the war, appealed for financial donations to help deliver food and aid to animals at various shelters, but said transporting animals and organizing evacuations were not not possible due to the logistical difficulties faced by a nation at war.

The haunting revelations made at the Borodyanka animal shelter come just a day after Ukrainian officials warned the town was also likely to have seen horrific atrocities committed against its human population by Russian forces.

Only 150 of the 485 dogs were found alive when the workers returned, 27 of which were transferred to local veterinarians in critical condition.

A video, posted by lawyer and head of the nonprofit Ukrainian Center for Civil Liberties Oleksandra Matviichuk, showed dozens of carcasses littering the floor of the UAnimals shelter.

Ukrainian Prosecutor General Iryna Venediktova told Ukrainian television yesterday that there was a “similar humanitarian situation” in Borodyanka to that in Bucha, where several mass graves and hundreds of dead civilians were found over the weekend. end.

Venediktova said “the worst situation in terms of the condition of the victims” was in Borodyanka, which is a little further from kyiv than Bucha and was also held by Russian forces until a few days ago.

Meanwhile, Ukrainian President Volodymyr Zelensky said yesterday that it had become more difficult for Ukraine has had to negotiate with Russia since kyiv became aware of the scale of alleged atrocities carried out by Russian troops just north of the capital.

“These are war crimes and will be recognized by the world as genocide,” said Zelensky, wearing a bulletproof vest and surrounded by military personnel as he observed mass graves in Bucha.

“It’s very hard to talk when you see what they’ve done here,” he said. “The longer the Russian Federation drags out the reunion process, the worse it is for them and for this situation and for this war.

“We know that thousands of people have been killed and tortured, with limbs severed, women raped and children murdered,” he said, adding that in Bucha and other towns in the region of kyiv ‘dead were found in barrels, basements, strangled, tortured’.

“You can see around you what has been done to this modern city. This is a characteristic of Russian soldiers: treating people worse than animals. It’s a real genocide, what you saw here today,” said President Zelensky, who was visibly moved as he observed the atrocities in Bucha yesterday.

A mass grave was discovered in the grounds of the Church of St. Andrew and Pyervozvannoho All Saints in Bucha

A Ukrainian policeman walks past a grave in the village of Motyzhyn, Ukraine, on April 3, where more than a dozen bodies, including those of the town’s mayor and his family, were discovered

Zelensky said despite the horrific human suffering in Bucha, residents were cooperating to ensure homeless animals were fed.

“It’s a trait of our people, I think – treat animals like you would treat humans,” he said.

“But you can see around you what has been done to this modern city. This is a characteristic of Russian soldiers: treating people worse than animals. It is a real genocide, what you have seen here today.

The Prosecutor General of Ukraine said the bodies of 410 civilians, many have their hands tied and close range gunshot wounds, were recovered from towns surrounding kyiv after Russian troops withdrew last week.

Another mass grave containing the bodies of at least 20 civilians, including a mayor and his family, was also discovered in the woods near the town of Motzyhn, about 20 miles west of Bucha.