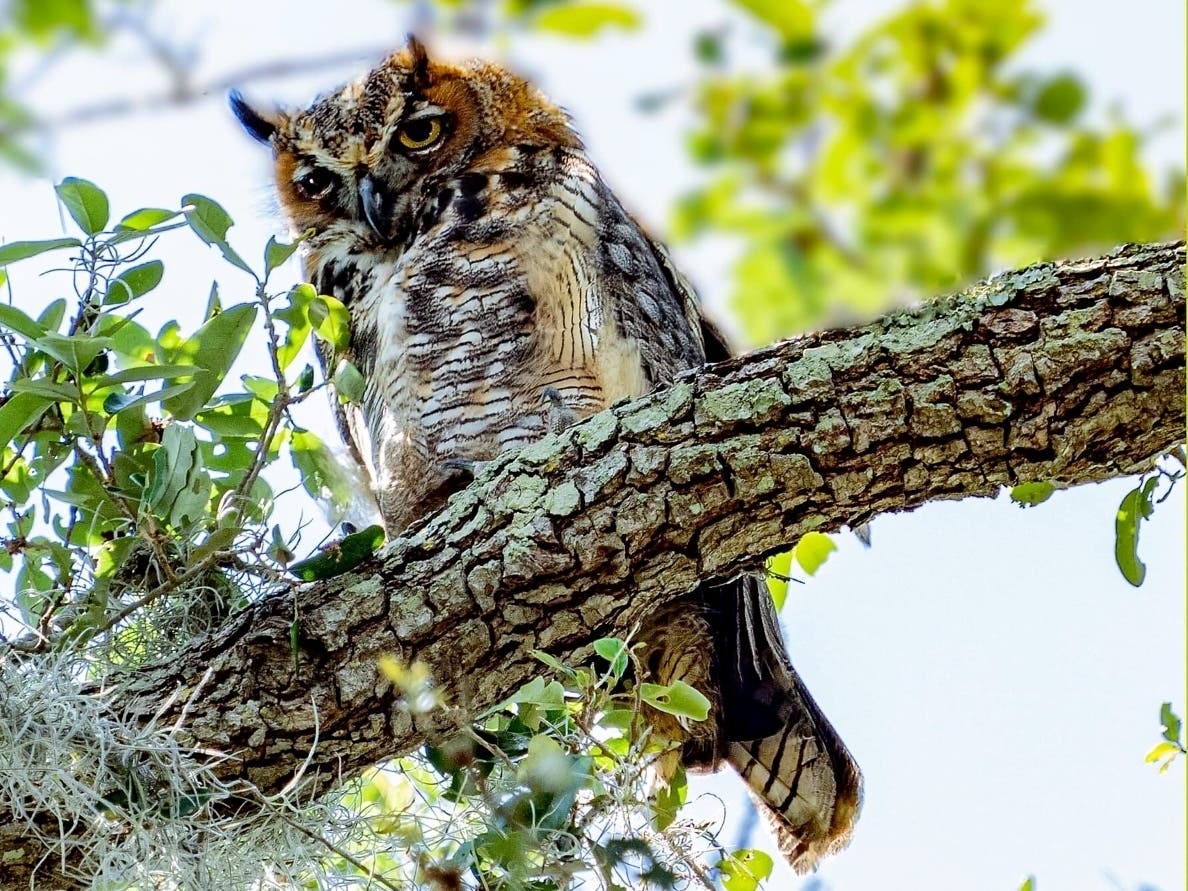 Rescue operation underway in Safety Harbor to save a surviving owl

SAFETY HARBOR, FL – Residents of Safety Harbor are staging a rescue Sunday to save a baby owl, the sole survivor of a beloved owl family in Philippe Park who died after eating rats dosed with rat poison.

Patch previously reported the death of mother owl, Emily, and two of her three owls, named Huey, Dewey and Louie after the Disney characters, who were born on New Year’s Eve.

A necropsy of the owls confirmed that the owls died after ingesting rodents that had consumed rodenticide, a rat poison that is routinely placed around restaurants, apartment buildings, businesses and City of Safety Harbor facilities to control the rat population.

On Friday, owl lovers, who have been keeping a close eye on the owl family that lives in a tree, nicknamed “the owl tree”, at Philippe Park, 2525 Philippe Parkway, announced the death of father owl, Oliver.

The surviving owl, renamed Dewey’s Daisy after owl watchers identified the owl as a female, is too young to feed. Owl lovers have contacted the Tampa Bay Raptor Center to save the owl.

After a failed attempt to trap the owl on Saturday, volunteers from the Raptor Center bait a trap on Sunday night in hopes of catching the owl. The nonprofit East Hillsborough County Center rescues, cares for and rehabilitates approximately 1,000 birds and animals each year with the goal of releasing them back into the wild.

In the meantime, nature lovers took turns, keeping an eye out for the little owl.

“After a day of vigil starting at 7 a.m. this morning and repeatedly chasing crows, at dusk Dewey (Daisy) flew out of the park before the trapper could settle in,” said Mia Thorpe , a Safety Harbor resident, on the group’s Facebook. page. “He’s scared and hungry. Need to feed him and/or trap him ASAP. Every day is crucial. We can’t let him die. Need volunteers to locate Dewey tomorrow and try again. Be covered. Thank you for your Warning.

Safety Harbor residents were heartbroken on March 4 when one of Emily and Oliver’s three owls, Huey, was found dead on the ground under the tree.

Three days later, an owl spotter spotted Emily bustling around in Tampa Bay. Barbara Walker, a wildlife rescuer with Moccasin Lake Raptor Sanctuary in Clearwater, waded out and retrieved the water owl, but was too late to save her.

Every December, Emily and Oliver make a nest in the “owl tree” where Emily lays eggs and hatches owls which the parents feed and care for until they are old enough to care for them themselves. The owl family usually maintains the nest until March or April.

“We had up to 50 photographers gathered at Philippe Park to photograph the owls,” he said. “We saw Oliver and Emily raising 13 owls in this tree, and we named each one of them. We learned to care deeply about these birds.”

For the past four years, Linda and Mark Schocken have traveled from their home in Carrollwood to Safety Harbor at least three times a week to observe and photograph the owls.

Mark Schocken, whose photographs of the owl family have been recognized by the Audubon Society, said they have been joined by photographers across the country who are taking advantage of the rare opportunity to capture images of a family of great -horned owls raising owls in the easily accessible “Owl Tree”.

Brisard said this is the second year owl watchers have witnessed owl deaths.

He believes rodent poison is responsible for the deaths of three of Emily’s hatched owls in 2021. One died on March 29 and another on April 15. A third owl disappeared on May 24.

Although Philip Park is in Pinellas County, it is within the city limits of Safety Harbor. After Huey and Emily died, owl watchers contacted Safety Harbor City Manager Matt Spoor, who immediately ordered the city to stop using the rodenticide bait boxes to control the rats.

“As soon as we heard about it, we removed our 20 traps from city facilities,” Spoor said.

Unfortunately, rodenticide is available at any Home Depot or Lowe’s, and is commonly used by businesses to control rats, Spoor said.

Since the city does not have the legal authority to prohibit the use of rodenticide, it has launched a public education campaign to alert residents, restaurants and other businesses to the dangers to the raptor population that feed poisoned rats.

The city is asking merchants and residents to voluntarily stop using rodenticides and is preparing rodenticide educational materials to distribute to residents with their monthly water bills. Additionally, the city is forming an ad hoc committee of businesses and environmentalists to discuss alternatives for controlling the rat population.

The problem is not unique to Safety Harbor.

According to United States Environmental Protection Agency, most rodenticides used today interfere with blood clotting and cause death from excessive bleeding. Deaths usually occur between four days and two weeks after the rodents begin feeding on the bait.

Anticoagulant rat poisons available at hardware stores contain brodifacoum, bromadiolone, difenacoum, or difethialone, or a combination of these chemicals. These are sold under the d-Con, Hot Shot, Generation, Talon and Havoc brands.

The EPA noted that the pesticides are not only deadly to rats and their predators, but also pose a risk to the family’s dog, cat and children.

The Audubon Society launched a national campaign against the use of rodenticides and asks the population to promise not to use these products. The company also asked Home Depot and Lowe’s to stop selling the rodenticides, but to this day major home improvement stores continue to sell them.

Instead of using poisons to control rat populations, the Audubon Society and other bird of prey conservation organizations promote the use of barn owl boxes.

the Florida Fish and Wildlife Conservation Commission mentioned barn owl, the smallest of the owls, are the least common owl species in Florida, although they can be found throughout the state. It turns out that mice and rats are their favorite snack.

Unlike the great horned owl, Florida’s largest species of owl with a 5-foot wingspan and distinctive “horns” on its head, which are actually feathers called plumicorns, the barn owl has a large white face. heart-shaped and weighs about a pound.

As their name suggests, barn owls like to roost in niches they find in barn rafters as well as tree cavities and other enclosed spaces where their offspring are protected from predators. In many states, they nest in cliff crevices. Florida’s lack of cliffs may be one reason for the state’s low barn owl population.