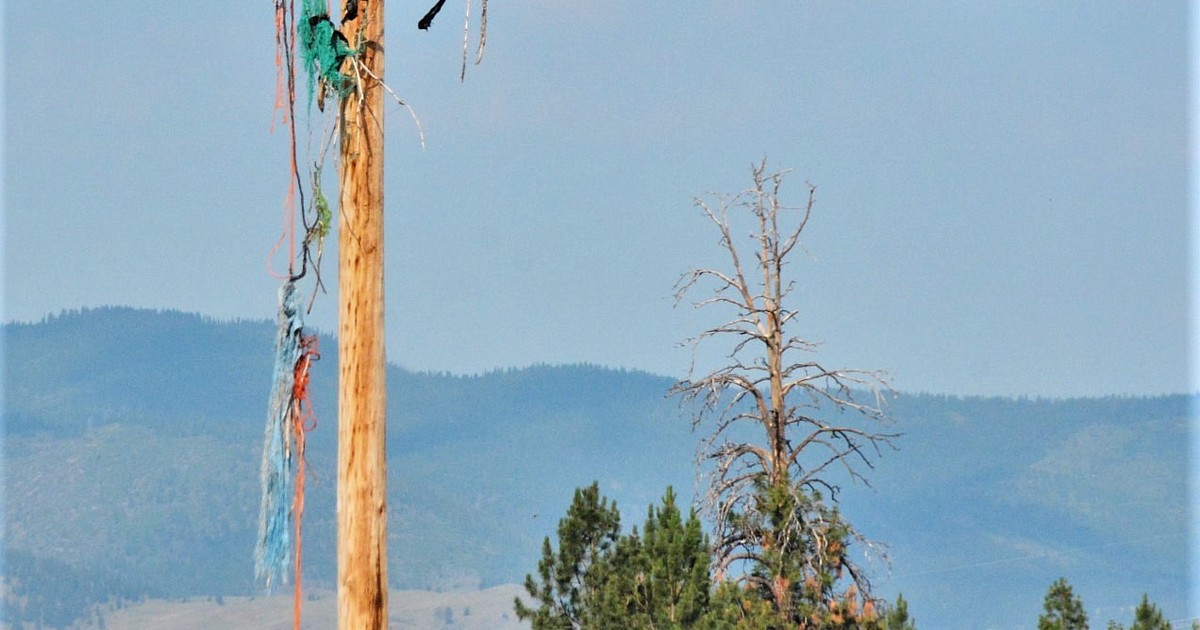 Last week, an osprey chick from the Ninepipes area, Charlie and Charlotte, was removed from its nest after becoming entangled for a second time in the hay twine brought to the nest by Charlie.

When viewers of the live video camera first noticed the chick tangled in the string, Owl Research Institute biologist Beth Mendelsohn enlisted a local signal truck company to lift her up so she could unravel the chick and remove the string from the nest. ORI has a policy of non-intervention in the affairs of nests seen on video camera, except in cases of man-made issues, as in this situation.

Mendelsohn found the chick’s leg swollen from being tightly wrapped in string. After consultation with specialists in raptor rehabilitation, it was decided to leave the chick in the nest.

Within a week, a second piece of string had been brought to the nest and the chick had quickly become entangled again. A second bucket truck was recruited and a midnight rescue ensued. Although the string was not as tightly wrapped around the bird as the first time around, Mendelsohn found that the injured leg did not improve. The chick was removed from the nest and taken to the Wild Skies Raptor Center in Potomac for rehabilitation.

â€œI wish it was a happier ending, but it’s such an important story,â€ Mendelsohn said. â€œThe osprey chick had to be humanely euthanized. ”

The leg was determined to be broken and the outlook for recovery was poor, she said.

â€œThe injury was more serious than you might expect just by wrapping the string. The injury was severe enough, we’re actually assuming an eagle owl tried to tear it off while it was caught but couldn’t free it from the string.

Or maybe a parent had also been caught in the string and ended up tightening it. Anything that happened at night would not have been seen on camera.

Baling twine is often left in the field when the bales are opened and is usually brought to nests for nesting material, Mendelsohn said. The twine kills up to 10 percent of the area’s osprey chicks each year, as well as adults.

â€œUnfortunately, it’s hard to convince the osprey that baling twine is not good nesting material (trust us, we’ve tried!),â€ Mendelsohn said in a blog post. “However, there are a few other things we can do to help make the world a safer place for osprey and their chicks:”

She suggests picking up string, fishing line and other rubbish, removing them to an area inaccessible to birds, and leaving suitable nesting material around.

â€œConsider this permission to do less gardening work. Leave some moss and trees with lichen on them, and when you’re safe, leave some dead trees on your property. Ospreys build their nests with sticks and line them with soft mosses, lichen and grasses. Many other birds will nest in standing dead trees, so you will benefit many species of birds, not just the osprey.

For more information on the Owl Research Institute in Charlo, visit owlresearchinstitute.org.