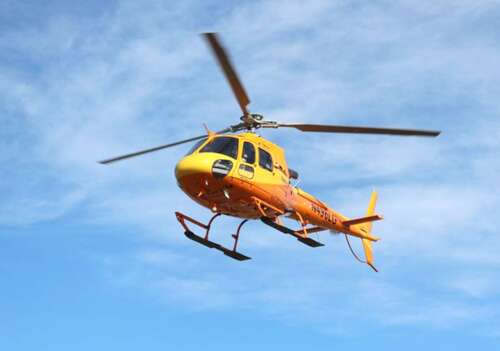 Durango’s Flight For Life responded to a snowmobile accident that injured a man Saturday on Bolam Pass northeast of Rico. (Courtesy of Dolores County Search and Rescue)

Dolores County, Rico Fire and Flight For Life team up to save injured man

A Montezuma County man was rescued from Bolam Pass Saturday in the San Juan National Forest after being injured in a snowmobile accident.

While snowmobiling with friends, the man flipped over his handlebars and broke his leg, said Capt. Keith Keesling of the Dolores County Search and Rescue Service.

The group used a cell phone to call for help. DCSAR, Rico Volunteer Fire Department and Flight For Life of Durango responded.

They administered medical aid and prepped the man for extraction by Flight For Life.

“There’s a good landing zone in this area,” Keesling said.

After landing, the helicopter had to take off briefly to burn fuel to accommodate the patient, he said.

The man was airlifted to Mercy Hospital and the injury was not life-threatening.

“Brilliant work by all,” Keesling said. “The entire rescue was completed in about two hours.”

He said the group was snowmobiling in a “pretty safe area” of avalanche danger when the accident happened. But he warned backcountry users of a persistent weak layer in the snowpack that triggered avalanches on the region’s steepest slopes.

Donkey Jamboree brings together children of all ages