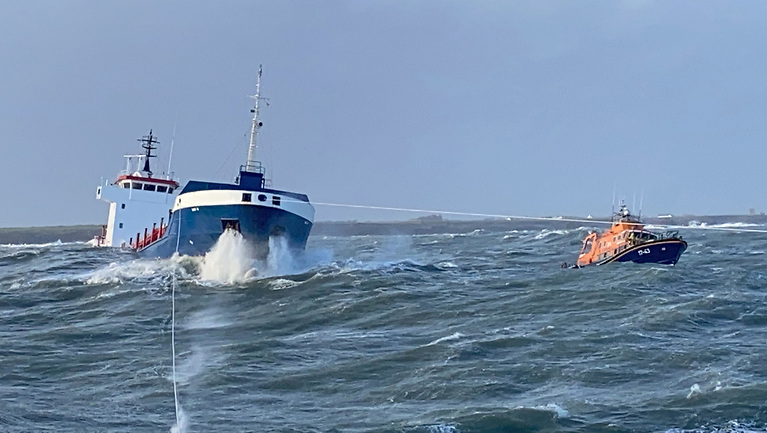 Volunteer crews from the Dunmore East, Kilmore Quay and Rosslare Harbor RNLI lifeboats will hit the small screen on Tuesday, October 12 as they feature in the eighth episode of the BBC television series Saving Lives at Sea.

Real life rescue footage gives a frontline view of how the association’s rescuers risk their own lives as they come to the aid of those in danger at sea and work to save everyone.

Now in its sixth series, the 10-part documentary features the rescue work of volunteer RNLI lifeboat crews from across Ireland and the UK. The series is on BBC Two Tuesdays at 8 p.m. and is available on BBC iPlayer after the broadcast.

Real life rescue footage is accompanied by moving interviews of volunteer lifeboat crews alongside the people they rescue and their families.

This upcoming episode, Tuesday, October 12, sees Dunmore East, Kilmore Quay and Rosslare Harbor RNLI, as well as Rescue 117, conduct a joint rescue operation off the Wexford coast. As Afloat reported at the time, the Lily B, a 100m general freighter with nine crew on board and carrying 4,000 tons of coal, lost all power two nautical miles from Hook Head in October. latest. Conditions at the scene were force 8 with strong gusts of force 9 and wave heights between 8 and 10 meters. The Lily B was drifting and at risk of hitting rocks on Hook Head or capsizing in rough seas.

The 12-hour service under difficult conditions saw several attempts by the crews of the lifeboats involved to establish a tow between the crashed vessel and the lifeboats. With the crew of the Lily B unable to stay on deck for long in the poor conditions and with language difficulties, two of the lifeboats eventually managed to get a rope across the deck using a rocket line and pulling the freighter off the rocks. . The towing of the lifeboat was maintained for three hours with waves continuously crashing onto the decks until the Tramontine tug from Waterford Harbor arrived on scene and took the tow. The three lifeboats remained with the Lily B until they reached the safety of the Waterford Estuary. The rescue operation was finally interrupted after 12 hours at sea for the crews of the lifeboats.

All three lifeboat crews involved are now to receive RNLI Bravery Awards for their role in the rescue.

Neville Murphy, one of the crew of the Dunmore East RNLI lifeboat featured in the next episode, said: “It’s great that we get to feature the rescue work of RNLI volunteers on a TV show. like this Without the generous support and donations from the public we wouldn’t be able to save lives at sea and it’s great to be able to share what we do with our supporters in the comfort of their own homes.

In 2020, the RNLI lifeboats in Ireland were launched 945 times with their volunteer crews assisting 1,147 people, 13 of whom were lives saved.

Twin towns see spike of wild cats on the street